I have a guest post over on Diginomics about the 3 monetary paradoxes of Bitcoin. Since yesterday’s post was about not investing in gold, it seems like a good segue to advise you not to invest in Bitcoin either. For that matter, don’t keep your savings in cash. All these assets have one thing in common: they are useful as a medium of exchange. Also, the more they are used as a store of value, the less useful they are as a medium of exchange.

But Bitcoin may be used everywhere, you say. And Bitcoin won’t be printed when the government wants to create inflation. That’s precisely the point. The limited nature of Bitcoin makes it only useful as one or the other: either it will be a great, open-source medium of exchange or a speculative vehicle to hoard cash. But because there’s really no value to Bitcoin without the transactions, it really isn’t a great place to invest.

Think of open source software. I’ve used it in the past as an alternative to Microsoft. It works just fine, and it’s free. But if I had invested in open source software, would I have made any money? Of course not, because it’s free! You might respond that it’s so useful that sometime in the future someone will make money off it. But the usefulness is directly correlated to its being free, so you’d be wrong.

The same is true of currencies, whether they be gold, cash or code. To illustrate, take a look at the graph below. This shows, by day, the # of transactions vs. the price of Bitcoin. There are really three stories. The first is a quickly-growing new currency that gains in price / gains in use. With no prior history, the price had to go up. The second phase was speculation. Transactions didn’t increase much as the price shot up (over to the right). Now we’re in the third phase, the most understandable phase. As the price of Bitcoin decreases, it continues to gain transactions. Use of the currency is negatively correlated to its price. 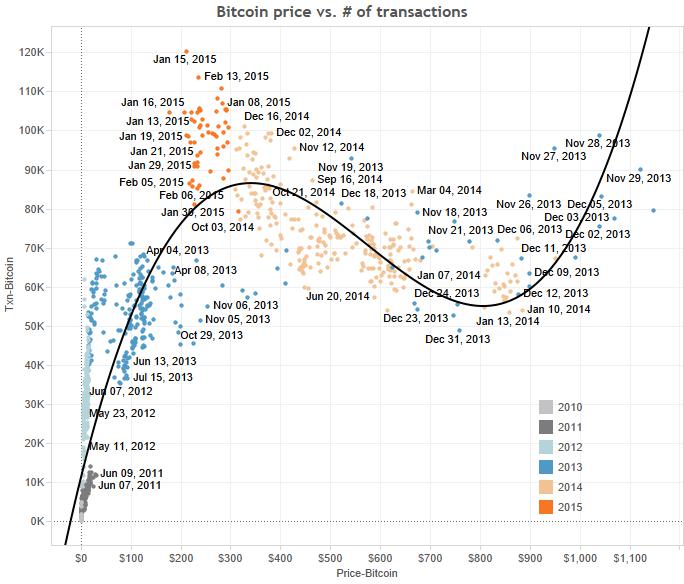 Currencies have an inherent friction. As the thing we agree to use publicly, it needs to be usable to transact business. Because rising prices are ingrained from decades of experience, the public demands a currency that decreases in value over time. This makes the dollar great for purchasing and great for a credit economy. It also means that hoarding cash is betting that the central bank can’t generate positive inflation. With the printing press at its disposal, you’ll always lose that bet.

As before, the best investment is in something that will follow nominal GDP, like stocks. As in my last post, gold and cash will not keep up with NGDP growth. And neither will the price of Bitcoin.