Unfortunately I only have time for a short post today. For another project I created the visualization below, indexing NGDP, 10-year treasuries, inflation and gold at 100 starting in 1933. For 10-year treasuries and inflation, the lines show what $100 would have become by applying 10-year yield / inflation rate in each year, compounded. 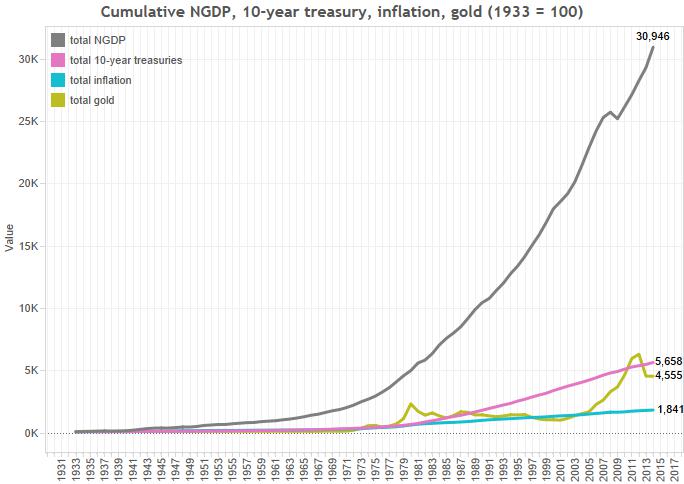 Which investments best approximate NGDP growth? The most accessible and liquid are stocks. Especially with the rise of broad-based ETFs where you can essentially purchase the entire market, it’s hard to see the “risk” in stocks vs. holding a commodity like gold (or “risk-free” treasuries).

Years like 2008 challenge that assumption. And commentators revel that investors had forgotten about risk. Of course those same commentators are nowhere to be found when stock prices rebound to all-time highs. They fail to remind us that, while sometimes bumpy, stocks do offer the best hope of wealth preservation among all asset classes. The risk is in not buying the market.

When do returns get bumpy? When the central bank fails to keep NGDP on that curve. When that happens, we fear an economic shutdown like the one that was starting in 2008. The Fed wrongly started worrying about asset bubbles in housing and stocks, and it proceeded to raise interest rates to stave off the beginnings of inflation. A similar story developed before the Great Depression in the late 1920’s. Everyone worries far too much about so-called asset bubbles. So long as we take our harsh deflationary medicine to “cure” us of our irrational exuberance, we’ll be all right, right? Wrong.

But even with the terrible Fed policies of the late 1920’s and 1930’s, and with sub-optimal Fed policy in 2008 (an understatement, but at least they corrected since then), stocks have still done well. If your money has to be on some kind of ride, make it the NGDP ride, not gold or treasuries.