In a past article, I explored which countries’ stock markets were safest for your money. Not long after, I saw this article on Warren Buffett taking an interest in German companies. Because Buffett seeks out value like a heat-seeking missile, I wanted to look into this. First, I turned to some Federal Reserve Economic Data (FRED).

A decent metric for national stock valuations is overall market capitalization vs. GDP. This is something Buffett has mentioned in the past. Of course you can see why Germany looks attractive. At 37%, it has by far the lowest rate of market cap / GDP out of the four largest world economies. Certainly you would expect a financial market as advanced as America’s to have a higher ratio, but China’s? Now, China’s ratio has fallen a lot since 2007, but it still stood at 59% in 2011 vs. Germany’s 37%. 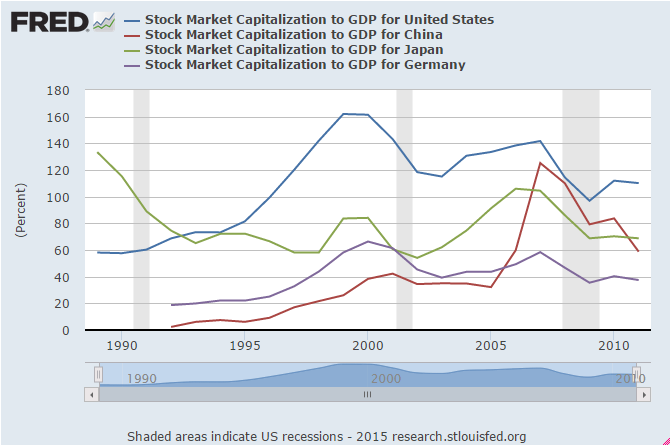 Below are Google finance data for various country-based ETFs — S&P500, Japan (EWJ), Germany (EWG), China (FXI). Before we begin, let’s examine what we’re missing. That way we can use any shortcomings of this analysis to see where there’s value and, hence, opportunity. What are we missing?

Looking at the change in markets since 2011 (where the FRED data cut off), we see that the S&P 500 shot up 67%. Share buybacks by American companies may have mitigated this, and smarter Federal Reserve policy to insure steady growth has helped markets immensely. Nevertheless, American companies are trading at a premium to the other three countries. Maybe investors trust the Federal Reserve more to preserve growth. If the last 8 years are a guide to future policy, they should trust the Fed more. But how much of a premium is that worth? Will social democratic Europe really tolerate depression and deflation for much longer? Draghi’s new QE program suggests that they will not.

All the other ETFs have appreciated more slowly, suggesting they remain undervalued when compared to US stocks. China’s ETF only increased 0.35%. With GDP growth coming in between 7%-9% since 2011, the market cap/GDP ratio now probably looks very solid for a value investor. Coming off a low base, Germany’s 26% appreciation looks like the start of something big, unless the ECB finds a way to screw it up.