There seems to be a lot of confusion among analysts, economists and investors as to what higher interest rates mean for stock markets. A lot of folks are eating up the fallacy that higher interest rates mean tighter monetary policy. While that could be the case, it’s not necessarily so. But that myth is causing markets to dive at any hint of Fed rate hikes later this year. So we’re in a weird conundrum where good economic news (which should be good for corporate earnings) = lower stock prices. We need to fix our mental model of what interest rates actually show us.

There are two possibilities. 1) Rising interest rates mean Fed policy is getting too tight too quickly, choking off nominal GDP growth and flirting with a deflationary disaster. This would obviously be bad for stocks. 2) Rising interest rates means growth is so strong that inflation expectations are also rising. This would be good stocks. I feel like the Fed will do the right thing and allow nominal growth to fill in the output gap, leading to higher rates eventually.

But I admit that I’m not always right, and the Fed made the mistake of over-tightening in 2008, which lead to the crisis. So I want to look at some Annual Retail Trade Survey data to see if there are industries safe from tighter conditions (conversely, I also want to know which companies will benefit the most from looser conditions). Luckily for us (unluckily for millions of unemployed), we had a good test of how collapsing NGDP growth affects different industries. We just need to look at the pattern in annual sales by industry before, during and after the crisis, which is what the graph below shows. 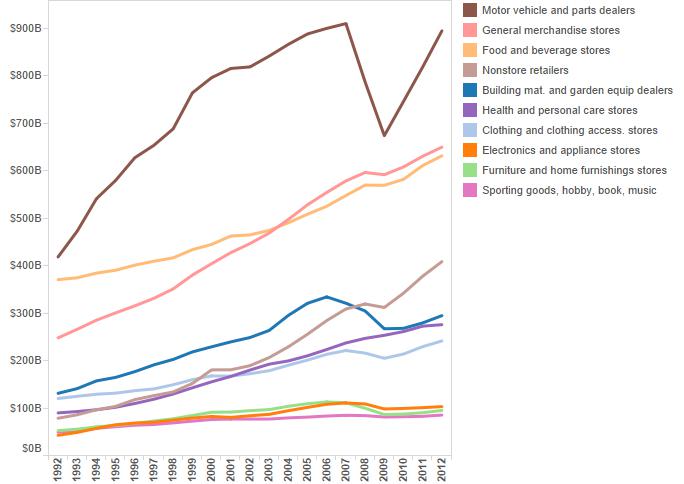 Not surprisingly, industries with a direct (or indirect) reliance on credit fared especially poorly during the economic crisis. This include motor vehicles, building/garden-supply dealers and furniture/home furnishing stores. While the latter two aren’t reliant on credit themselves, they are tied closely to housing, which is extremely reliant on credit conditions. Any premature Fed tightening will ravage these businesses. That said, because of this risk, a lot of these businesses, like car companies and banks, are undervalued. Because I believe the Fed will play it smart, I recommend holding a best-in-class car company like Toyota (TM) and a best-in-class bank like Wells Fargo (WFC).

Where do you go for safety if I’m wrong? Look for where the curves remain strong during the crisis. Or for a clearer picture, below is sales growth by industry over time, with more red indicating a greater fall. 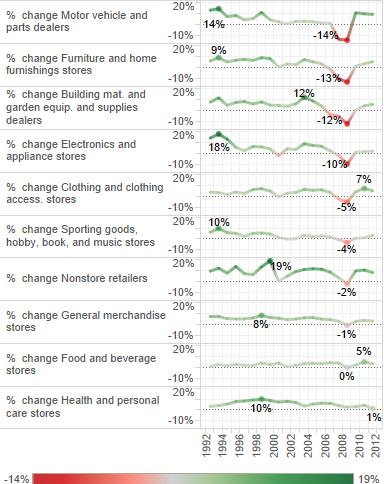 Appliances & electronics were also strongly affected by the 2008 panic (we didn’t see it as clearly because of the scale in the initial graph). But what about “safe” industries? For nice, flat (but not as fast-growing) curves, we find health & personal care, food & beverage, general merchandise and non-store retailers including e-commerce.

Health care sales growth didn’t crash during the crisis, but it looks set on a a downward trend since then (perhaps Obamacare is working). But food & beverage and general merchandise stores look safe. For an analysis on the top 3 companies by sector, check out my past article on where to find a safe haven. In these sectors, I like Coca Cola (KO) and Wal-Mart (WMT).

Despite Fed programs to support aggregate demand since 2008, we can’t fully trust the Fed to always do the right thing. After all, tight policies leading up to the crisis got us into this mess in the first place. But Yellen is making all the right noises about waiting until inflation perks up before raising rates. However, if you believe in safety first, food, beverage and general merchandise stocks will be for you.