The March jobs report came out today, and the economy racked up another impressive number. This was somewhat surprising as all the previous economic reports this week suggested weakness and depressed prices. Indeed, the jobs report contained a nugget of bad news as wages only increased 2% over the past year. Questions remain around when the Federal Reserve will raise rates. Pundits are moving the date closer, but the Fed must beware of muted price pressures.

For investors, the best news is good economic news combined with low inflation expectations (which means lower rates). That is exactly what we’re getting. Let’s put the February jobs number in context. Below are new jobs since 2005 vs. treasury yields. Since December 2013 (when the Fed started tapering QE3), we’ve had lower yields with more new jobs. In other words, inflation expectations remained muted, but people are finding new jobs (albeit not with much higher salaries). 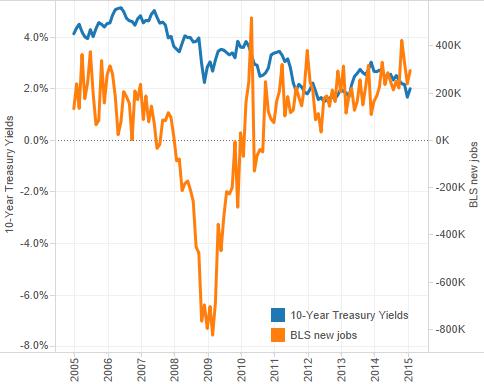 What has this meant for the stock market? As monthly job totals have increased, the S&P 500 has probed new highs. More jobs should lead to more consumer spending and higher nominal GDP. The combination of higher growth expectations with low interest rates has been a boon to stocks. 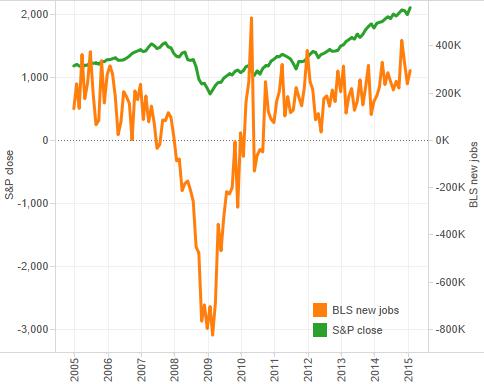 From the graph below, since 2012 higher or lower interest rates haven’t changed the upward trajectory of markets. The Fed saved the economy in 2008, giving us all reason to trust that we could be saved from any economic collapse. There was no repeat of the Great Depression, so the Fed learned its lesson. Focus on nominal aggregates rather than interest rates. Thus we had QE1, QE2 and QE3 to push expectations higher even at the so-called zero bound. This certainly gives us the higher valuations we have today. 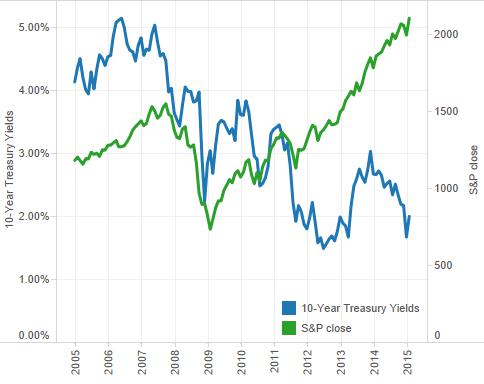 But today the S&P 500 is down by over 1%. Why? If interest rate increases previously had no effect on rising markets, why have we suddenly become skittish? Earlier increases in treasury yields were expectations of future inflation. This was good for stocks. But the rise in yields today is more in anticipation of Fed tightening. In light of recent data on falling prices and stagnant wages, such tightening still seems premature. Expect soothing words from Janet Yellen later this month. February’s job report was good news, but not yet good enough to start raising rates. Stocks will benefit.