We like to think the Federal Reserve omnipotent over the monetary conditions in the United States. Indeed, if the Federal Reserve wants to inflate, it can do so. But while it strongly influences monetary conditions, sometimes loosening (tightening) can happen all on its own. The Fed can steer the ship, but not control the waves buffeting the hull. With the loss of the Swiss National Bank’s political will to keep the Swiss franc weak, a round of European Central Bank QE to inflate (competitively devalue) the Euro, it seems monetary conditions have indeed tightened in the US, as evidenced by the fall in 10-year treasury yields. But how will this affect major US banks’ stock prices?

Below are stock prices/market caps for the four American banks with over $1 trillion in assets (WFC, JPM, BAC, C). Since the Great Recession (caused by a lack of confidence in the Federal Reserve to maintain prices), bank stock prices & market caps have regrouped, approaching their pre-recession levels (Bank of America is the exception). 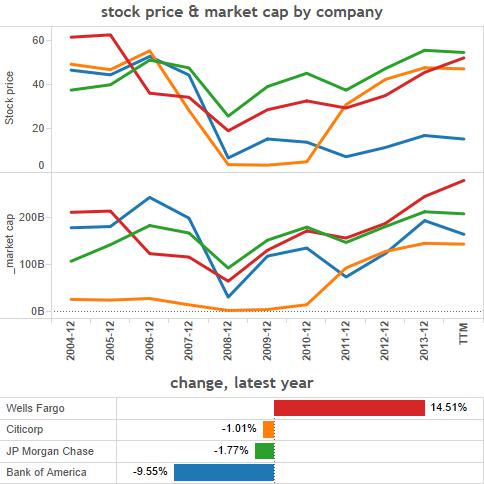 On every valuation metric, these four banks look fairly valued when viewed in context of their 10-year history. In fact, these valuations haven’t recovered fully to their pre-recession levels, most likely because growth in housing fueled more expected growth before 2008. Even so, aside from Bank of America’s tough year in regards to net income, p/e ratios look good. Wells Fargo has a higher valuation in regards to sales & book value, but simply because it over-performs in generating net income from its sales & assets. 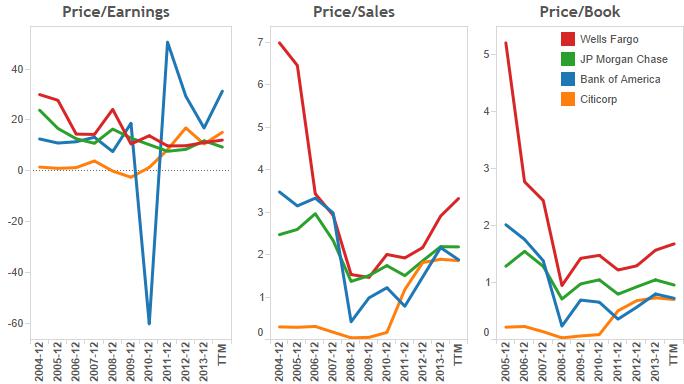 Banks are a hard nut to crack when it comes to cash generation. One of the more trustworthy stats in determining the ability of a bank to generate sufficient cash is whether it can maintain a dividend. Wells (WFC) and JP Morgan Chase (JPM) stand out here for their strong dividend payments over the last 4 years. Bank of America (BAC) and Citicorp (C) don’t look as healthy — and perhaps deserve their lower valuations based on price/book ratios. 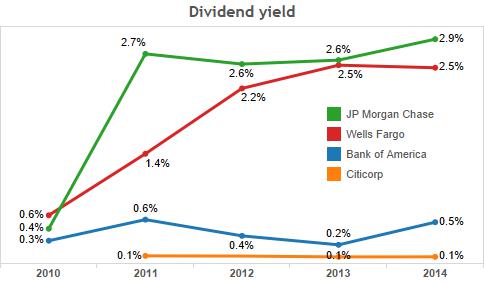 Revenues & profits have followed a similar pattern, though JP Morgan Chase & Wells Fargo stand out with the best upward-facing trends since 2008, especially in terms of net income. On the right, we can compare the running total of net income over the last five years with market cap. Though Wells Fargo has a higher valuation, JP Morgan Chase has brought in a sum total of $6 billion more in net income. But the last two years have been better for Wells. 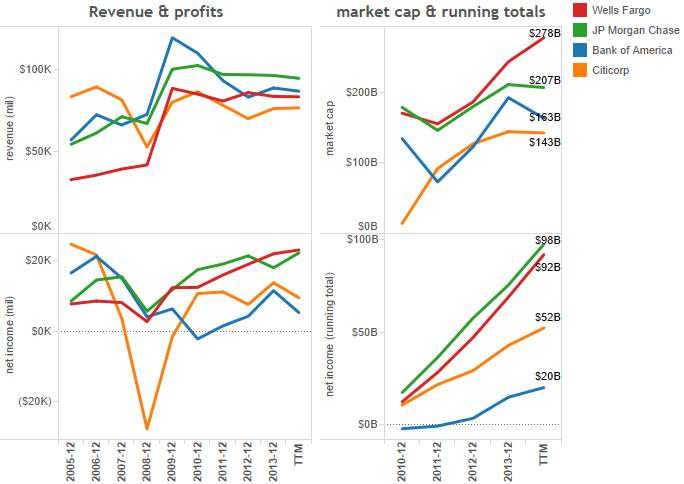 Below are balance sheet percentages (of total assets). Here we’re looking for any warnings signs that one of our massive banks might be at risk if monetary conditions tighten further. In fact, all of our banks seem to be converging over time. Citicorp has been building more equity (starting from a lower level). All the banks saw spikes in long-term debt (as a % of assets) at the height of the financial crisis, then have moved to a far lower level now. Wells & Citicorp stand out for having better debt-to-equity ratios now than before the crisis. Though with the convergence, it doesn’t seem like JPM or BAC should maintain ultra-low debt in light of their peers’. 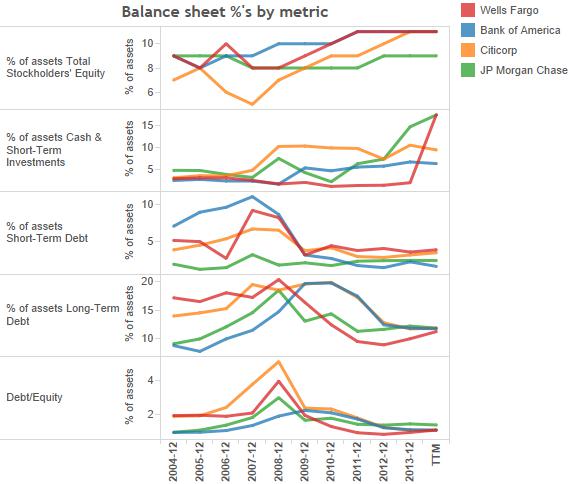 Below are the same metrics, but swapping rows and colors to we can see intra-company patterns for comparison. 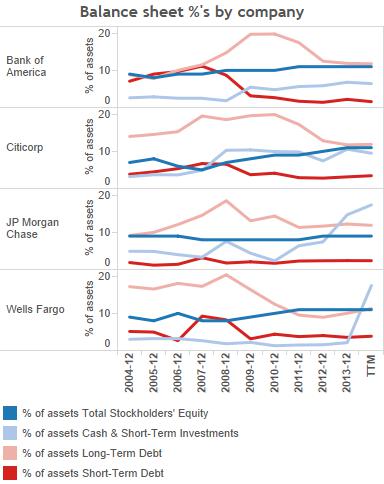 As far as valuations and profits go, Bank of America and Citicorp look cheap, but Wells Fargo and JP Morgan Chase have the best trends in net income, more than justifying their higher valuations. If monetary conditions do continue to tighten (and I remind you that this is not just a Federal Reserve question: Yellen may want to do more QE / extend expected zero-interest-rate policy to ease conditions when faced with a Euro devaluation, but may face too much political pressure not to), then you’ll want the strongest banks in your portfolio.

Because of the sheer size of these banks’ balance sheets, they have an implicit guarantee of government backing. But there are numbers, and there’s politics. Last time we had a massive bank bailout, torches were lit and pitchforks raised. Will the government summon the courage to act in the face of massive popular dissent? In the case of further deflationary pressure, I like Wells Fargo with it’s (maybe) government guarantee and it’s more-important Warren-Buffett guarantee.

Where are monetary conditions heading?

Below is a graph of 10-year treasury yields. When the Fed printed money to buy bonds, yields rose. This seems counter intuitive unless you consider that lower yields = we expect less inflation = debt becomes more expensive in real terms = conditions are tightening. QE raised our expectations of inflation so that we sold bonds and bought riskier assets. If that process goes into reverse, bank balance sheets may come under pressure if the Federal Reserve doesn’t act quickly quash expectations of deflation. See my article on volatility and dropping interest rates. 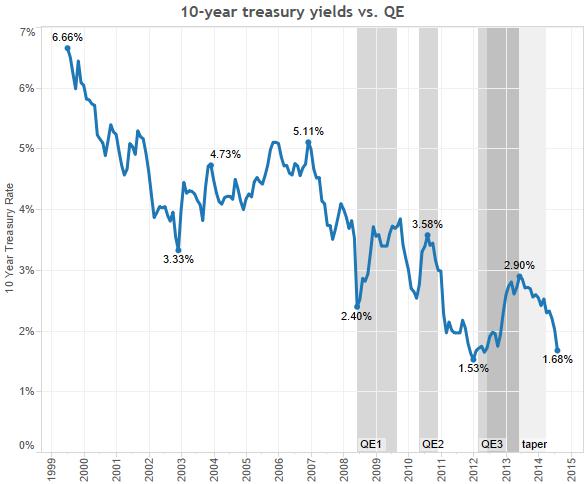 If you disagree that low interest rates = tight policy (because in every other article you hear that low rates = loose policy) consider the graph below of historical 10-year treasury yields. The troughs are in the late 1800’s (silver agitation threatened the gold standard, causing capital flight from the US), the 1930’s (Great Depression), and now. The spikes are in 1920 (tail-end of WWI inflation, beginning of early-1920’s deflation) and, more notably, in the late 1970s/early 1980s (tail-end of the big inflation, then Paul Volker breaking the back of said inflation). 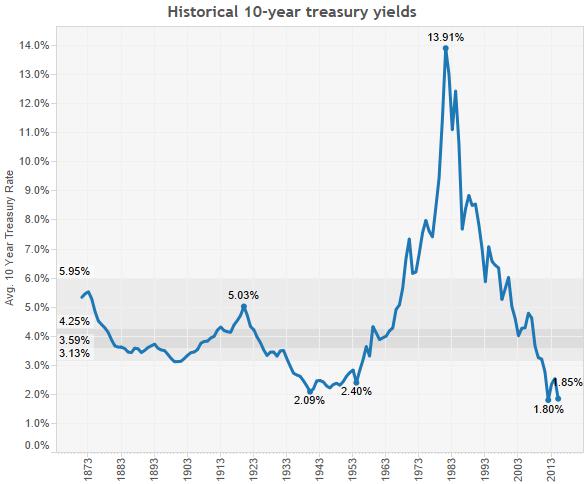 High interest rates can mean loose policy, or the beginning of a fiercely tighter policy. But low rates mean only one thing. Nominal growth is stagnant and prices weak. If actions by the Swiss National Bank make us challenge our leaders’ own political will to inflate, and Euro devaluation exports European low-flation to the United States, then banks will be in for a bumpy ride. And so many other companies that rely on long-term financing for revenues (see my visual analysis of car industry stocks).