On Jan 19th, Jen commented on my first school shooting data visualization, “Note that there are no incidents in Vermont, one of the states with the most lenient gun laws. Just saying.”

That’s an interesting point, and nothing in my school shootings data visualization did anything to answer whether gun control laws, or gun ownership in general, had any affect on the number of school shootings. V

Visually, the best way to find a relationship between two variables is the scatter plot. This first graph shows the number of school shootings since 1990 per 1 million people vs. % of gun ownership in a state. The correlation looks positive, but there are too many outliers. The p-value is under 0.05, so the suggested relationship is statistically insignificant. 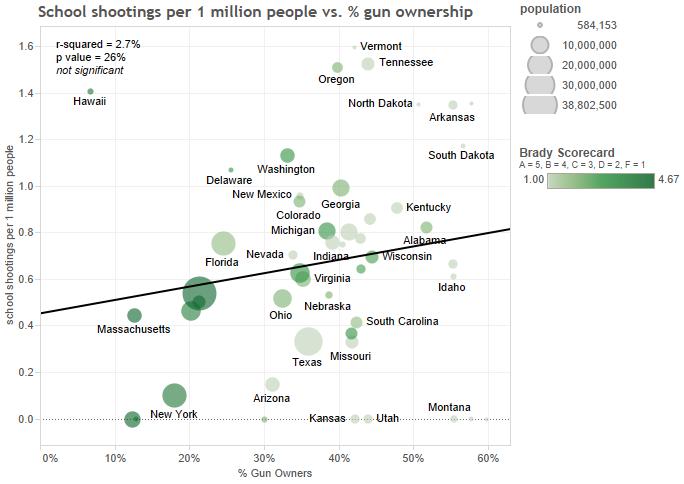 Because school shootings are rather rare events, I wondered if the question about Vermont is moot because, in such a small state, there would be a very low chance of any school shooting. In fact, in the scatter plot above, all the states that hug 0 shootings are small. Below is the same graph removing states with less than two million people. Here the relationship is significant (p value is well below 0.05) and the relationship between the two is predicted 17% by the trendline. 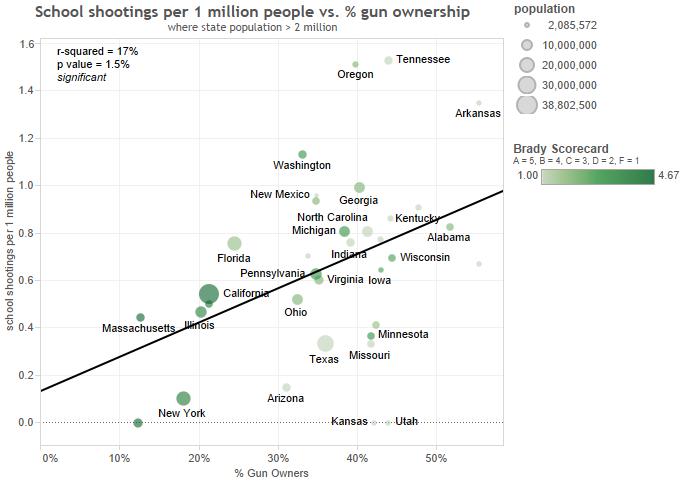 I don’t like cherry picking states to make a case, so let’s try overall firearm deaths from the CDC to see if that correlates better (at least there is more data). In fact, gun ownership % vs. firearm deaths for all ages AND for 5-17 years old both correlate better than # of school shootings. 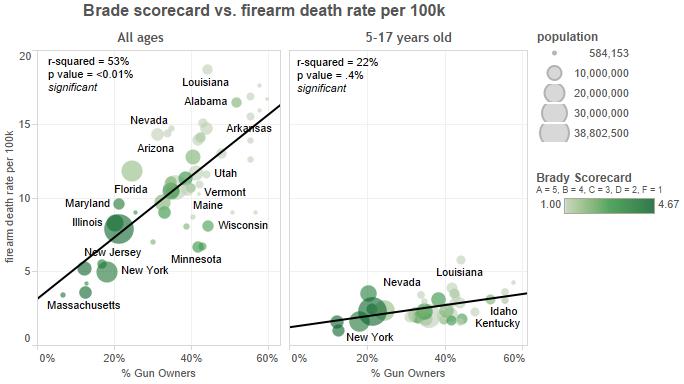 In the previous graphs we directly correlated gun owner %, not legal system. Quantifying such a qualitative measure like legal system is nigh impossible. The Brady State Scorecard seeks to rate each state’s legal system in regards to guns. I changed their grade (A-F) to a number (5-1). I did not purposely choose a pro-gun-control group – they just came up highest in google search. I assume that both sides of the debate would strive for accuracy in the legal system they purport to change. That the Brady Score is very negatively correlated with gun owner % gives me confidence that they have a decent representation of the legal system. 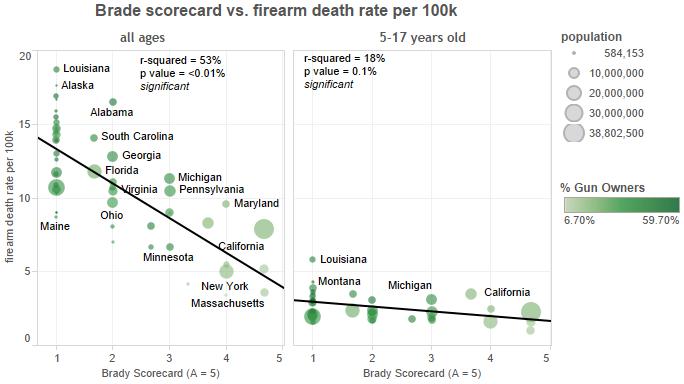 Just because both variables are correlated doesn’t mean one caused the other. A state with weak gun laws might have started with more murders. That unsafe environment may have encouraged gun ownership rather than the other way around. I recall a study being done some years ago that purported to show that, when you compare two similar geographic areas that straddle a legal boundary, the side with laxer gun laws is actually safer. If anyone knows the name of the study, please put it in the comments section, and I’ll look into it.