It looks like Republicans want a little credit for the growing number of new jobs. No doubt Obama will point it out incessantly when he speaks for the next Democratic nominee for President. But you won’t be hearing about the Bernanke or the Yellen economy. The folks that do the most to steer aggregate demand have faced some tough challenges: economic and political. But it looks like their policies are finally paying off.

It’s hard to piece apart macroeconomic cause and effect because there are a lot of moving pieces and feedback loops. But we can at least look at what the data say about whether or not Federal Reserve policy has worked over the last seven years in bringing about a recovery.

The chart below looks at two variables: monthly job gains/losses vs. interest rates. The shaded areas are quantitative easing: the middle-gray-shaded areas are “normal” periods of easing. The darker gray represents an aggressive pickup in QE3, while the light gray is the taper.

What does the above chart tell us? It looks like the Fed fell behind around April 2008. Job losses were becoming a bigger problem, yet rates stayed 2% until September. Then the bottom fell out, the federal funds rate quickly dropped to 0%, and QE1 began in December. Not much changed until February 2009 when things began to pick up. The noises from the Federal Reserve as well as other arms of the government turned around our expectation that the economy would continue its collapse. But we had to wait until April 2010 (more than a year) for any positive jobs figures.

With no more QE, new jobs dived again until QE2. Here it looks like the Fed played a pivotal role in reversing our expectations of deflation and a double-dip recession. The same story happens again from March until June of 2012 when the moving average of new jobs again turned south. QE3, then aggressive QE3, turned the tide. With the taper over, so far it looks like the Fed is correct that the economy has enough steam to generate jobs on its own. But let’s add another variable: 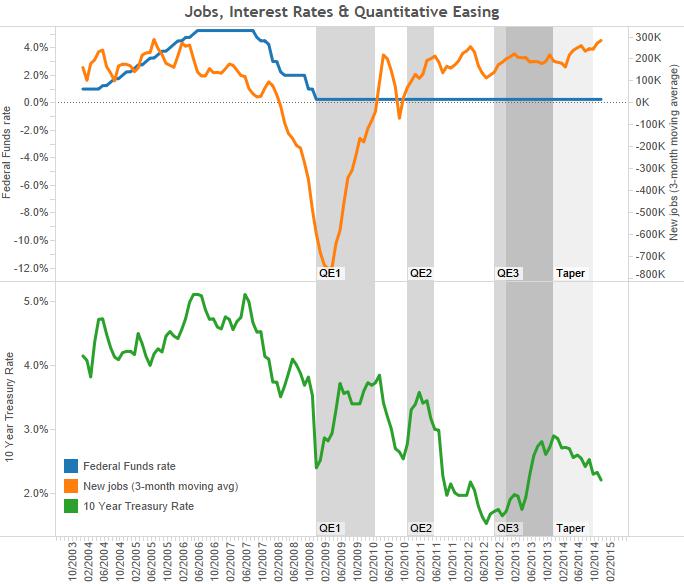 If we look at 10-year-treasury yields during the various periods of QE, we see something rather odd. When the Fed prints more money, interest rates rise. This shouldn’t be the case; printing money to buy bonds should lower interest rates. What’s going on?

This may be counter-intuitive, but Fed money printing had the effect of raising our expectation of future inflation. So while Bernanke or Yellen bought treasuries, the rest of us started investing in riskier assets. Thus, interest rates jumped. What’s worrying is that, since the taper, interest rates have trended lower. The economy seems able to create jobs, but we must be expecting lower inflation if we’re buying bonds that yield less and less. For some historical context on 10-year treasury yields, see the below graph that stretches back to 1871: 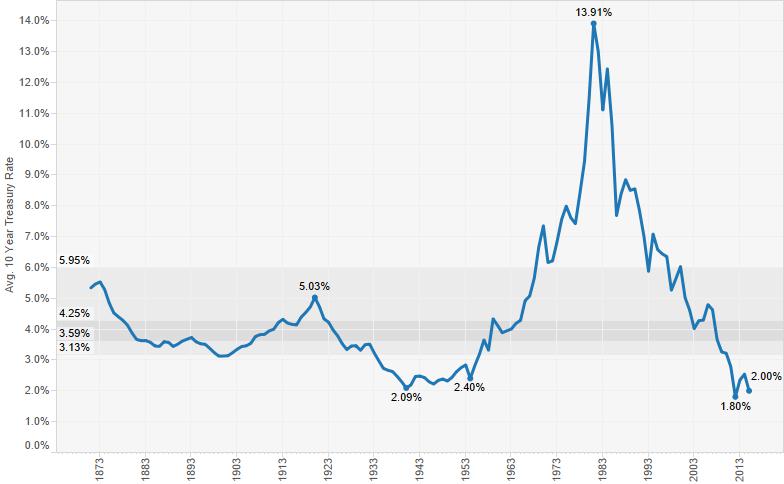 For all you hawks out there complaining about lower interest rates helping creditors, look at this chart closely. If you want high interest rates, go to the early 1920’s or the late 1970’s. These were both periods of high inflation and supercharged NGDP growth. Low interest rates are not a sign that monetary policy is too loose, but rather too tight. Another graph: 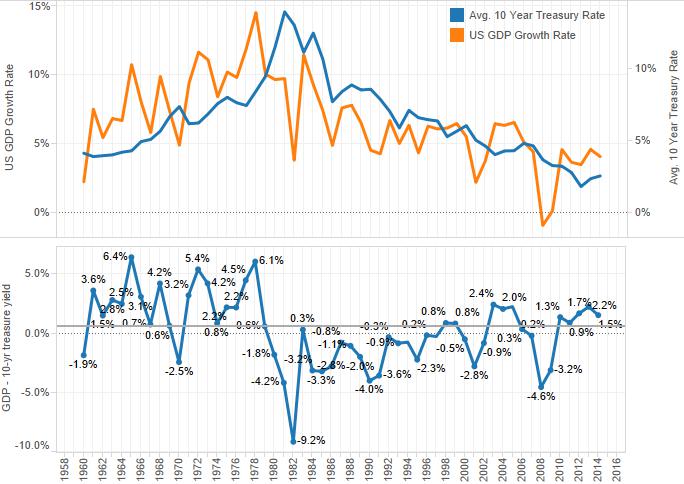 From the 1960’s until the very late 1970’s, the Federal Reserve let NGDP growth get out of control. Treasury yields were always behind the curve and the economy accelerated to faster and faster nominal growth rates (and higher inflation). When Paul Volker broke the back of inflation, it seemed that interest rates finally caught up. And we’ve had tighter monetary policy compressing NGDP growth downwards ever since.

Since 2010, the difference between NGDP and 10-year-treasury yields is positive (only slightly). But during tight times, the gap between the two variables is growing on the down spikes. Rates stayed fairly high through the late 1990’s boom, despite relatively low nominal growth. And the Federal Reserve appears far more tolerant of a highly negative differential between growth and 10-year rates.

In simple terms, since the mid-1990’s, the Federal Reserve has pursued a much tighter monetary policy. We expect less nominal growth, less inflation because the Fed will err lower than 2%, but not above. Now when the American economy experiences a recession, we fear that we’ll fall into long-term deflation and depression. This keeps a lid on investment, consumption and wages by continually restricting nominal growth. Far from punishing savers and investors, this policy hurts those who took debt with a certain expectation of future earnings growth. With that growth stagnant, debtors must reverse course and spend less. And the crises will continue to get worse until debtors realize that their expectations of future wage growth will not come true. Or the Fed convinces us that it will tolerant higher inflation.