As an avid reader of TheMoneyIllusion, I’ve been surprised to learn that monetary policy since 2008 has been very tight, and this is a major factor in America’s slow recovery from the Great Recession. The ECB, though its interest rates hover around 0%, is currently pursuing an ultra-tight monetary policy.

This had major implications for investment decisions since 2008. For instance, I saw (and ignored) a lot of commercials touting gold as a great buy because of coming hyperinflation. But now it seems that inflation is at bay, and gold has fallen 9% over the past 6 months.

But what about the future? First of all, monetary policy seeks to affect inflation through interest rates. But these are imperfect tools (see my last article Why no inflation? Because the Fed Tail Doesn’t Wag the Dog). The best view of monetary policy is to look at our aggregate expectation of income rather than interest rates. Has that changed with 3rd quarter GDP growth coming in at 5%? Is our long-awaited hyperinflation just around the corner?

To answer that, we need to look at how expectations are changing. For that, see the figure below where the orange line represents nominal GDP indexed at 1950 = 100. Leading market monetarist Scott Sumner argues for an NGDP target of 5% per year. Using 1950 or even 1970 as the base year would have led to far less aggregate income now. 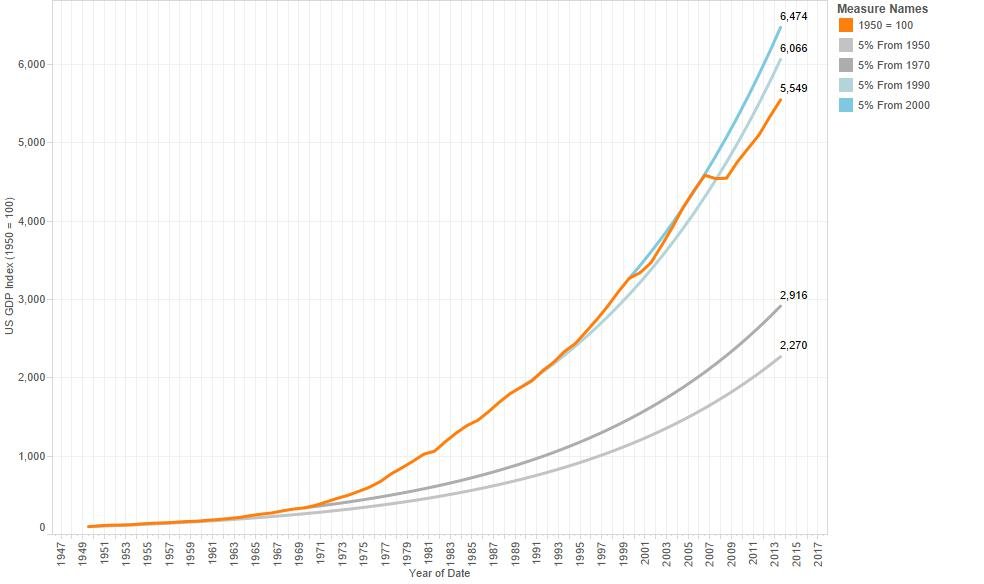 Because workers aren’t setting their income expectations as far back as 1950 or 1970, we should look at more recent expectations, using 1990 or 2000 as a base year. We as consumers use our past incomes to extrapolate how much credit (and consumption) we can afford. From there we can see that 5% NGDP growth from 1990 would have resulted in 9% higher aggregate incomes today. From 2000, 17% higher incomes. In order to move expectations to the point where we would see inflation, we’d need a least 10% nominal growth ON TOP OF the 4%-6% we’re achieving now.

That won’t happen in the next year. Therefore monetary policy remains tight because expectations of aggregate income haven’t filled the hole left by the 2008 depression. Another look takes un-adjusted GDP indexed at 1950 vs. a 5-year moving average of nominal growth. 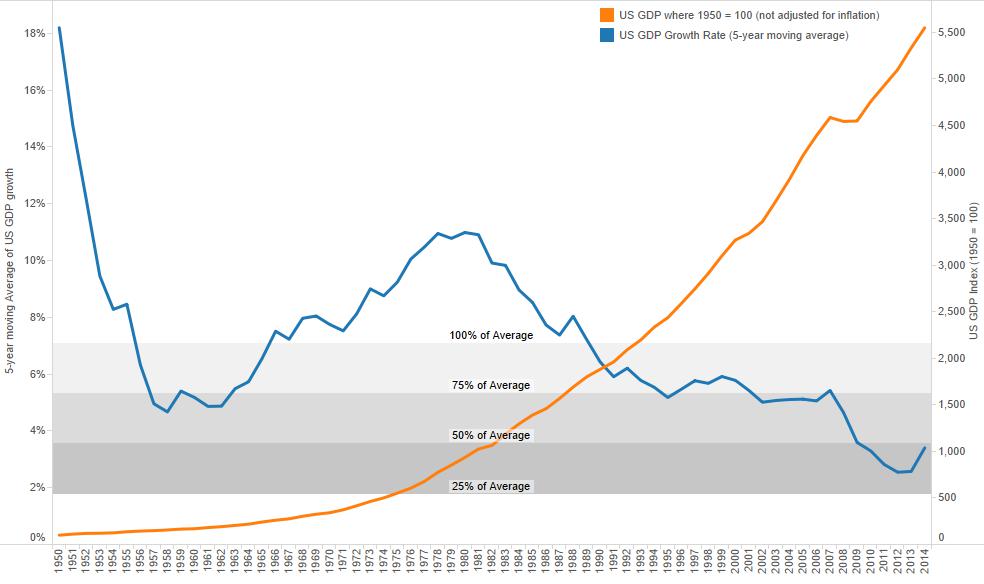 But will the economy keep rising? The Fed is now unwinding QE and talking softly about raising interest rate in 2015. With the 5-year moving average of growth so low, the risk of continued stagnation seems far more prevalent than the risk of high inflation (which is still a long way off).

What does this mean for investors?

If we can expect low growth in nominal incomes as monetary policy remains tight, what assets will retain their value? In a low-growth environment, preserving income and seeking safe returns are a good bet. Swinging for the fences with growth won’t work. Expecting more than 8% returns also won’t do. And with low returns, safe-looking sovereign or municipal bonds look shakier as well.

First of all, avoid commodities like gold or oil (though oil stocks have fallen a lot recently, which might present opportunities). Fear of high-dividend stocks seems unjustified. Safe, high-interest blue-chip equities represent the safest opportunity to preserve capital (like AT&T, IBM or GE).